The Danakil (Afar) Depression; is a geological depression near the Horn of Africa, in the northern Ethiopia. One of the mostly geologically active. Afar is well known as one of the cradles of hominids, containing the Middle Awash, site of many fossil hominid discoveries; Gona, site of the worlds oldest stone tools; and Hadar, site of Lucy, the fossilized specimen of Australopithecus afarensis.
The Danakil Depression, an esteemed destination among adventure travelers, features a permanent lava lake and a bright-yellow sulphuric plain, while the Simien Mountains wrinkle the land with canyons and peaks with a beauty you’ll struggle to find anywhere else in Africa.

Take the morning flight from addis abeba to mekele, meet the driver nd guide at the airport, then have short stop at the city for coffee. After short break Drive from Mekele to Afdera,  Danakil Depression can be said to ‘begin’ here. It is one of the spectacular most inhospitable regions of the world, but is nonetheless spectacular, Drive to afdera via small village of eribt.

Afdera is one of the city in the Afar Region of Ethiopia. It is named after the
saline Lake Afdera, located in the southern part of the Afar Depression.
swimming on the salt lake and enjoy the hot spring near the lake,

Accommodation at: Camping near the lake,

Afdera – Dodom 70km. visit the salt Mainers(local people are pumping the salt water and evaporating the water) near the lake, start let drive to Dodom (at the base of Erta Ale). Dodom is about 8.5km from Erta Ale and it takes about 3 hrs trekking.

Early dinner around 17:00 and trek up to Ertale at 20:00 hours. Camels transport all the camping materials and some food (sleeping materials like light mattresses and water) to the rim of the volcano, where we spend the night watching the dramatic action of the boiling lava. Erta Ale ranks one of the most alluring and physically challenging natural attractions anywhere in Ethiopia. It is a shield volcano with a base diameter of 30 km and 1km square caldera at its summit. Erta Ale contains the world’s only permanent lava lake. Overnight on the top of the mountain. Erta Ale is 613 meters
high, with a lava lake one of the five in the world with two creates north
creator with native( sleepy)creator It is notable for being the longest
existing lava lake, and south creator is the most active with lava lake
summit. Present since the early years of the twentieth century.

Accommodation at: Camping at Erta Ale

waking up early for sunset and visit north crater, Descend from Erta Ale around 7:00am artale-dedom Leave back to Dodom you will reach latest at 09:30 am at the camp , after breakfast time to relax. at 10:30 drive to hamad ela 100km,picnic lunch on the way on shed of palm tree, reach Hamad Ela 04:30, better village with a total population about 500 people. Accommodation at: camping at Hamed Ela.

Morning tour Drive to Ragad (Asebo), the place where the
localities are mining salt. 1,200 km2 (460 sq mi) the Afar Depression is covered by salt, and salt Look the activity of breaking the salt from the ground, local people are cutting in to rectangular pieces and loading on camels.

You drive ahead to Dallol and visit the difference landscape formed by volcanic activity, Dallol + Lake Assal + salt canon, camel caravans, follow up camel caravans and Drive back to Hamedela and proceed to Mekele. 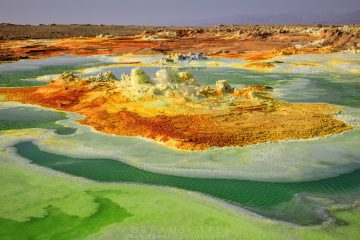